Remember the Jian Ghomeshi case in Canada? Every woman in Toronto does.

The fall of 2014 was filled with it. The heady days when female strangers across generations and demographics would get into impassioned conversations in coffee shops. It was a watershed moment. We could finally talk about it. About all of the stories that we had buried but were at our fingertips. From the story of the time that you said no, but passed out and when you woke up it was happening, and then you kept dating him; to the time you were swimming laps at the university pool and some older guy swam up behind you at the wall and pressed himself against you while making casual conversation. WTF; to being grabbed on the subway, to cat called in public. These stories opened up the conversation about the confusion around consent and unpacking shame around female sexual desire. So while there was a lot of empowering going on, the fact that we still live in a rape culture was also super present. This story takes place in the midst of the trial in the spring of 2016.

Driving from Los Angeles to Las Vegas is one of the more spectacular drives you’ll do. It’s magnificent, it’s humbling, it references all the movies that you’ve seen with this landscape. It is surreal. And driving into Las Vegas is also surreal. It reminded me of The Jetsons. A fururistic city just kind of appears from within the vast and desolate desert. An hour out of town I pulled off at a gas-food-lodging exit to book a hotel on Hotwire. 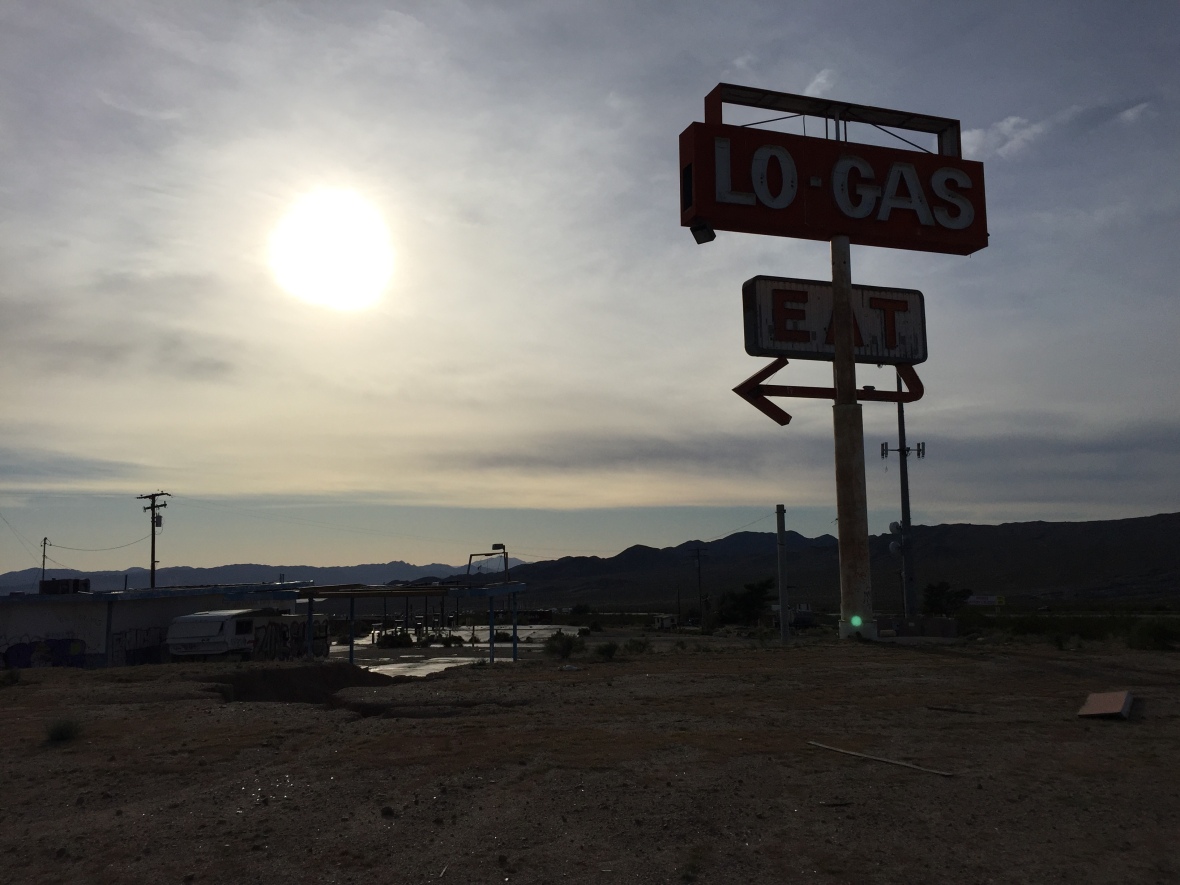 I pulled into a dodgy looking Vegas motel and casino that I’d found for $50 a night. I parked my Trusty Stead – the white station wagon (not sexy) that I’d been rented in San Francisco the week before. She was new and sexy as far as oversized hatchbacks go. But a station wagon nonetheless. Dashed were my visions of speeding down Highway 1 with the roof down in a sporty little number that hugged the curves and messed up my hair.

The lobby was the casino. It was not as well ventilated as the big hotel casinos on the strip where you can be standing close enough to get burned and still not smell the cigarette someone is smoking beside you.

The woman at the desk took my credit card and drivers license to confirm the booking. Then she put the map of the complex on the counter and circled my room number and traced the path from reception to the room (which was a little box in hundreds of other little boxes making a pattern) with her pencil. I asked her to repeat herself. She did. I asked her what room I was in. She circled it again. “And where is it?” I asked. She said, it’s over here, and traced the path with her pencil again. “I’d park in front of your room if I were you.” I might had said, “isn’t it safe here?” Or she just volunteered “I’m not saying your room number on purpose. You know, Erin Andrews.” I said I didn’t. She said “it’s all over the news” and the woman checking in next to me nodded in affirmation. “Make sure you lock your door and park outside your room.”

I got to my room. I placed the spare room key as close to the door as possible, and put the chain on the door. Then I opened the door and walked across the room and swung open the closet doors. Same with the cabinets. I kicked around the base of the bed to make sure it was solid and no one could be underneath. Then I drew the curtains.

Then I left. I brought the extra key with me. I went to an awesome pizza place downtown. Only while there did I dare google Erin Andrews. She was alive. She hadn’t been raped. No one had beat her up or hidden in her room. Someone had merely spied on her through the peep hole in her hotel room. So the receptionist wasn’t saying room numbers aloud so that any potential eavesdroppers couldn’t ask for the room next to yours and bore holes in the walls and spy on you. She did however suggest that you park outside your room making it not too difficult for anyone around to casually watch you leave the reception and go out for a smoke to watch you pull out of the parking spot in front of the lobby and make note of what kind of car you drive and wander around to the side of the building to see where you park.

It’s a strange world. I read an article written by a young woman about how when a man hits on a woman she is busy wondering what the risk factor is. She already knows if she’ll sleep with him. And whether that answer is yes or no, she is sussing out what kind of danger he might pose if rejected – will he be violent, will he be a stalker? This is the world that I know exists. Its not the one I live in usually, thankfully. But it is the world I switch into when hotel receptionists say “Erin Andrews” in a conspiring and secret sounding voice. The same way we say “Jian” in Canada.

I nearly had a party in my hotel room when I got back to it. 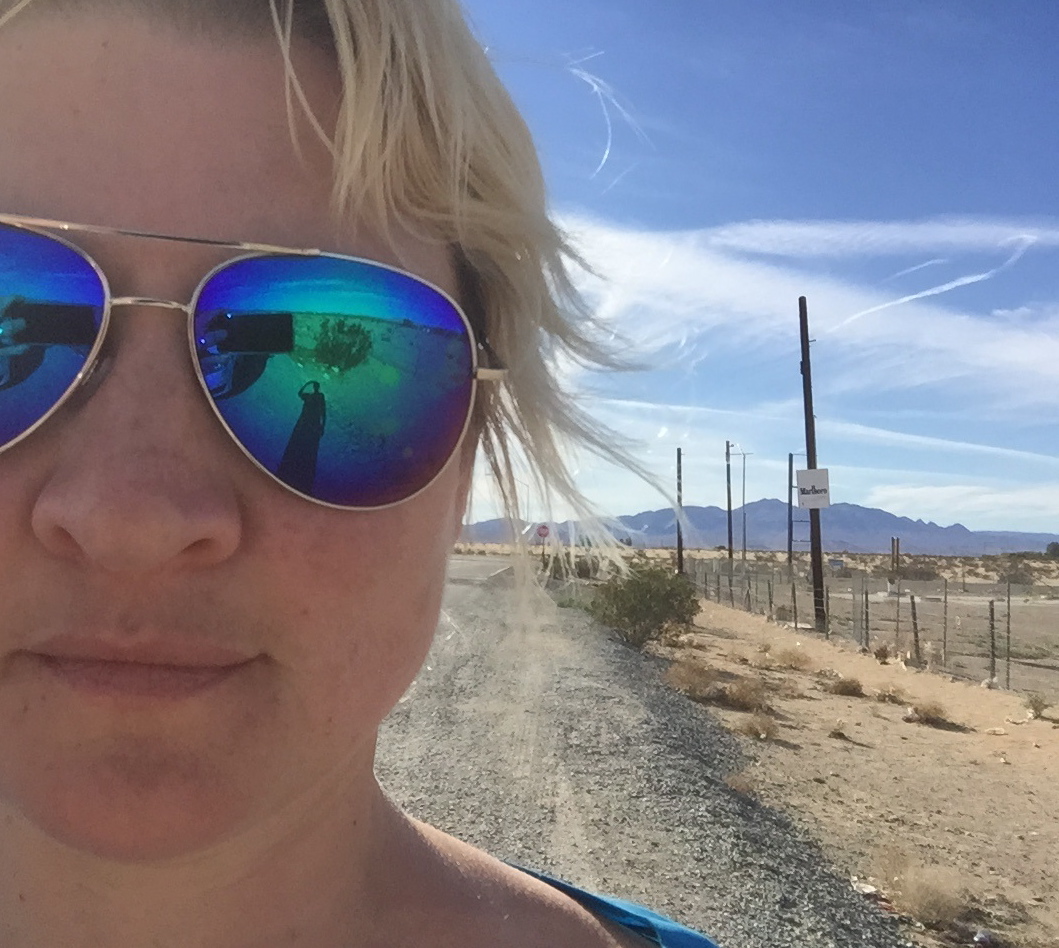 On the road, outside of Las Vegas.